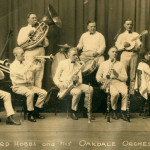 The title of the exhibition brings to mind people born in the 20s of the 20th century, brought up between two World Wars, firmly linked to Polish traditions and being often the only alive conveyor between old culture and history that pass out together with them. The tile is a play of the artist with the viewers who will not find such values in this exhibition.
Kamila Mankus made a distressing scenery in the gallery space that is rather designed for contemplation. The artist encourages viewers to think about passing, pointing out the role of the media on the creating people’s views on the death. A comfortable mattress in the shape of a coffin may familiarise us with the thought of the eternal rest and make us realise the impoverishing of present-day culture from its traditional rituals. The moment of death was brought to a cliché by subjectivity or rather placing symbols of death in the mass production. The media enable us to get used to the pictures of dramatic events that make us immune to sympathy for violence and fate of underprivileged. The exhibition is a comment on the existing universal values and safe distance to our past and future which is obtained by society for its own convenience.
The works presented in Kamila’s exhibition |Born in the 20s| were made during the first residential period organised by The Salony Foundation in Wry Chimney.