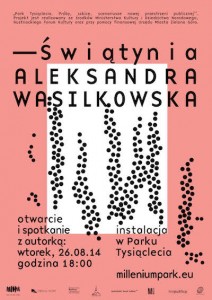 Art is something you piss on, the common comment on the Marcel Duchamp’s famous urinal (The Fountain) says. In an attempt to expand on this, one can venture a general statement that people piss on everything they do not understand or want to deny and consign into oblivion.

Similarly, anything uneasy, awkward and unattractive that exists in urban space has been pissed on, rejected, and removed, in a process of modernisation of cities and societies. Baron Haussmann, in order to increase social control and hygiene in Paris, tore down its old buildings and wiped out its narrow streets. Le Corbusier, like most other modernists, followed suit in his hygienic approach to architecture when he wanted to remove all ‚coin de pisse’ – (lit. peeing corners) – dark lanes of the un-modern architecture.

Polish cities seem to have also been affected by the sanitisation within the ‘euro- refurbishment’. Unwanted heritage, direct selling in the street, squalid backstreets, public toilets– they are all vanishing. In this ever changing environment peeing remains a most humane thing, the nagging physiology can remind of itself, on short or no notice, any time, whether one’s swimming in the sea, or hiking on a mountain top, whether it be in a park or at the graveyard. The blue portable toilets appearing only occasionally in public landscape are not always enough.

Millennium Park – a one time post-German Cemetery of The Green Cross, boasts some places to take a comfort break in. These are thick bushes, the remains of the cemetery architecture – the corners of the old crematory building and the devastated Tomb of George Beuchelt (d.1913), who was a famous entrepreneur, engineer and social activist of Zielona Góra. The rotunda- shaped tomb, with a dome supported by a series of columns was designed according to the style of the 19th-century park pavilions inspired by the architecture of Greek temples, known as The Temples of Contemplation.
In Beuchelt’s Tomb the sacred meets the profane, and historical sophistication mingles with mundaneness of physiology. At present the Tomb is mostly used and regarded as the town’s public toilet.
The title of the work made by Aleksandra Wasilkowska: Temple is a play on the double connotation of the word. On one hand, Temple of Contemplation is a colloquial term for a public toilet, but it is at the same time the name for a place of concentration, reflection and ‚the sublime’. Wasilkowska’s work unites two, seemingly distant, motifs: memory and body by mapping places in Zielona Góra, where history is (both literally and metaphorically) pissed on. These ‚pee landmarks’ have been decorated with flowers that, in the same way as weeds in the ruins of temples and demolished graves, become living signs of oblivion.

Aleksandra Wasilkowska – architect and artist based in Warsaw/Poland; established a studio in Warsaw in 2007 for spatial and social research and practice after studying architecture at Warsaw University of Technology and Ecole d’Architecture de Bretagne in France. She has collaborated on projects with scientists and curators to explore the territories between architecture and art. Projects investigatating new urban strategies, performance and public space have included Time Machine (2011), Black Island (2011), Assembling in Public (2010), Shadow Architecture (2013) and Emergency Exit (2010) in the Polish Pavilion during XIIth Architectural Biennale in Venice, Bazaristan in the frame of the capital of Culture Wrocław 2016. Wasilkowska has participated in exhibitions at Museum of Modern Art /Warsaw, CCA in Warsaw and Tbilisi/Georgia, National Gallery Zachęta, Institute of the Avant-garde, Bunkier Sztuki in Krakow, Guggenheim Museum in New York, Seoul Art Center, National Theater in Warsaw.

Organisation: Fundacja Salony, BWA Zielona Góra
Media Partners: Magazyn Miasta, Res Publica Nowa, Radio Zielona Góra
This event is part of the “Millennium Park. Rehearsals, sketches, scenarios of the new public space” project. It is financed by the Ministry of Culture and National Heritage as well as by the support of the City Council of Zielona Góra.
milleniumpark.eu